Markland Wood is the most western residential community in Toronto along Bloor Street. It's located on land originally owned by John Silverthorn who built a saw and grist mill on the nearby river bank then purchased by Mark Cavotti in September 1958. Markland is wrapped nearly entirely by the Markland Wood Country Club that follows the lowlands around Etobicoke Creek. In fact, there are only 4 entrances to the community!

Today Markland Wood (singular!) is an upscale neighbourhood with many green spaces, larger lots, and neighbourhood character built into solid brick homes, beautiful landscaping and quiet cul-de-sacs. Many homeowners grew up in the area and have returned with their families. There are many upscale condos, and housing styles date from the 1960s, with detached two-storey Georgian and Regency Revivals, backsplits and modern bungalows. This neighbourhood recently won awards for community outreach and for being Clean & Beautiful.

A distinctive part of the area is the local Markland Home Association. The MHA operates the longest community newspaper, The Marklander, and holds various events throughout the year, e.g. the Annual Christmas Caravan & Food Drive, Easter Egg Hunt, Environmental Day Clean Up, Community Garage Sale, even a Champagne Social held in September. The schools in the area are also excellent. Silverthorn Collegiate was rated as one of the best schools in Toronto for athletes, and has graduated many high performers. Its a great place to attend if a student is hoping to earn scholarships.

There are various shopping malls nearby including the Markland Wood Plaza, and Burnhamthorpe Mall. Nearby is the Trillium Health Centre, making the community a perfect choice for health care practitioners who want to live in the area. 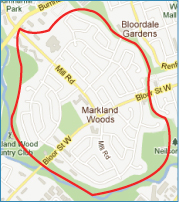