Often referred to as a "European village setting", Bloor West Village includes about 8 blocks east of Jane St. where locals and visitors enjoy over 400 shops, restaurants and services. Here's where I find some of my favourite baked goods, fresh fruits and deli meats.

There's something for everyone in the village. For history buffs, check out the beautifully renovated Runnymede library. It was originally built in 1929, with stone totem poles framing the original entrance! The old Runnymede Theatre (now a Chapters store) was originally a Vaudeville House in the 1920's. And each summer, Bloor West Village hosts the largest Ukrainian street party in North America.

Bloor West locals all know about the series of parkettes that run south of Bloor between Windemere and Durie. Quietly secluded from the bustle of Bloor, these little parks are the perfect way to continue your way on a hot summer day or a crisp fall afternoon.

Bloor West Village also is next to Toronto's largest and most beautiful parks. Every year I mark my calendar so I don't miss the blooming of the Japanese maple trees mid April. All year round, High Park offers a playground for all ages for picnics, hiking, cross country skiing, outdoor theatre, skating, dog-walking or just daydreaming. The park has 150-year old black oak tress, 40 species of rare plants, and for the little ones, a train and a real zoo (check out the peacocks and bison). 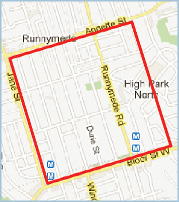