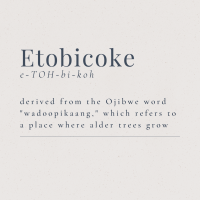 Etobicoke started out as a uniquely distinct collection of villages and small towns. Today it is home to some of the most sought after residential neighbourhoods in the Greater Toronto Area.

“Etobicoke” is derived from the Ojibwe word "wadoopikaang," which refers to a place where alder trees grow.
FUN FACT: Not everyone knows the ‘k’ is silent. In the Netflix documentary ‘Don't F**k with Cats: Hunting an Internet Killer’ about Luka Magnotta an expert references ‘Et-i-b-COKE’ several times.

Long Branch was a summer resort in the 1800s
Originally the 64 acres of land was bought by a consortium & the plan was to subdivide it into 25 villa lots. The first cottage still stands at 262 Lake Promenade in 1886. It was a gated community where alcohol was prohibited and vehicles were banned on Sundays. It was a thriving resort community until the 1930s. It is now a community that offers a balance of vibrant city living with a quiet suburban existence.

The oldest building in Etobicoke is a house at 23 Jason Rd. in Thistletown. It was built pre-1920, and was once owned by Johnthan Grubb who was the businessman responsible for the construction on Albion Rd. It is currently owned by his great, great, great grandson.

Clairveille is named for the eldest of the six daughters of Jean de la Haye, the founder of the village.

The Six Points intersection - where Dundas, Bloor, and Kipling meet - was once called “Wood’s Corner” - after the family that eventually owned land on five of its six points.
Etobicoke is home to George’s Golf and Country Club, a five-time host of the Canadian Open, ranked as one of the world’s top golf clubs.

Hurricane Hazel struck Etobicoke on October 15, 1954. 81 people died,  35 people were killed on one street. The area around the Humber river was the hardest hit with bridges washing out and homes dragged away. The devastating impact of Hurricane Hazel precipitated a regional approach to flood control & water management in Ontario. For more details you can visit Hurricane Hazel website