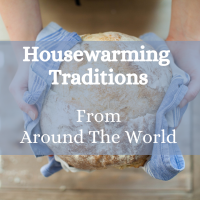 Housewarming Traditions From Around The World

There are lots of ways to celebrate the purchase of a home with family, friends, and new neighbours. Here are some lovely traditions from around the world.

Light a candle on your first night
It is considered good luck to light a candle or a fire (assuming you have a fireplace) on the first night in your new home. This tradition dates back to pre-electricity days when it literally warmed the new abode.

Bring bread & salt
Bread and salt are two important symbols of hospitality in many cultures. It is believed that they should be the first two items to be brought to the new home. Bread ensures that the occupants never go hungry and salt promises flavour & spice to the lives of the new homeowners.

Ring a Bell
According to feng shui, ringing a bell helps clear a room of bad vibes. Opening windows, turning on fans and letting in sunlight are also part of the feng shui tradition.

Burning of sage
The burning of sage is one of many Indigenous traditions celebrated around the world. The ceremony is believed to clear negative energy out of the space, & add protection from evil spirits.