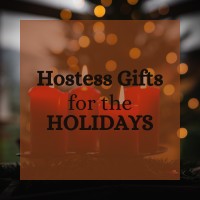 Hostess Gifts for the Holidays

It looks like the holiday season 2021 is going to be a bit more like normal this year. If you’ve been lucky enough to score some invites, we found some great stories behind some of the more traditional hostess gifts we thought you might enjoy.

Plants
A great gift that reminds the recipient that you appreciated their invitation. It can be enjoyed for years to come (depending on how green the hostesses thumb is).
Rosemary
It is believed that smelling the rosemary plants leaves on Christmas Eve will bring health and happiness to the new year.
Poinsettias
There is an old Mexican legend that tells the story of a poor little girl who had no presents to leave for baby Jesus at Christmas Eve mass. Her uncle told her not to worry that any gift, no matter how small, would be appreciated. She collected some weeds along the way to mass and created a bouquet. As she placed the weeds at the altar they burst into red flowers. It was considered a miracle by those who witnessed it. From that day bright red flowers are known as “Flowers of the Holy Night”.

Chocolate
Coins
Giving chocolate coins as a gift is said to be inspired by the good deeds of St. Nicholas in the 4th century. He was generous & very shy so he would go around town dropping coins down chimneys and through windows into children's stockings.
The Jewish festival of Hanukkah also features children receiving coins. In late Victorian Britain, chocolate coins were used to decorate the Christmas tree.

Candles
A candle in the window
The significance of lighting candles varies throughout the world. Many different cultures have used it as a sign that the home was safe for a religious figure to enter the home under the cover of darkness.
They are also known as a symbol of welcome to weary travelers. In some cultures, a candle in the window announces the birth of a child or another family blessing. The candle symbolizes celebration & gratefulness.
Providing warmth
Christmas candles are also symbolic of the light from heaven which provides us with warmth during the cold winter nights.
Religious reasons
Christians light a candle to represent the Star of Bethlehem, guiding the Magi to the stable where Jesus was born.
For those of Jewish faith, a menorah in the window is a Jewish custom symbolizing the miracle of Hanukkah.

There is nothing better than being able to share the holiday season with friends and family. We wish you all the best this holiday season.