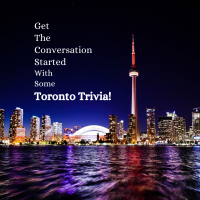 Get The Conversation Started With Some Toronto Trivia!

Now that we’re starting to socialize a little bit, here are some great conversation starters about our beloved Toronto.

What does “Toronto” mean?
Toronto is derived from the Mohawk word tkaronto. It means “where there are trees standing in water”.

Who lives in Toronto?
Did you know that nearly half of the population of Toronto was born outside of Canada? Toronto is recognized by both the United Nations and the BBC as the most multicultural city in the world.

Before Toronto got the nickname “the 6ix” it was called Hogtown, do you know why?
It was originally believed that Toronto was nicknamed “Hogtown” because it housed the sprawling stockyards of the William Davies Company. Or maybe that’s just what people living in Toronto wanted to believe?
A less flattering version of how Toronto got its nickname is that people from other Ontario towns wanted to convey that Torontonians acted like pigs and took everything for themselves. Being a proud Torontonian I take exception to that!

What are the gates to Exhibition Place called?
They are not actually called Princess Gates as many people believe. The triumphal arches, flanked by cement & stone columns that open onto the Strachan Ave on the west side of Exhibition Place are actually called the Prince’s Gates. They were named after Edward, Prince of Wales, and Prince George, Duke of Kent because they were scheduled to open the new structure in 1927.

Where is the half house in Toronto?
54 1/2 St. Patrick’s St. that’s where! It is literally ½ a house.  It was built in the late 1890s, one of six identical homes. In the middle of the 20th century, all but one owner sold their properties to a land developer. As of 2013 the property is privately owned and is vacant.

Do you have any stories to share about Toronto? We’d love to hear them!