The Westway is one of Toronto’s first subdivisions. The street itself is an extension of Lawrence Avenue West, which meanders through the neighbourhood. Here you’ll find a variety of 1950s and 60s bungalows with large lawns and garages as well as high-rise apartments. Some of the streets, like the Westway, curve to give the area a distinct residential feel. Just north of Dixon Road, lies Kingsview, a residential area developed on the site of the former Dixon family estate.  Those in the area know that 'Kingsview' refers to the neighbourhood's position on high ground, north of the top of the street.

Westway Village is well situated for transportation, shopping, recreation and good schools. It’s a short ride to Pearson International Airport (Dixon Road turns into Airport Road), with easy access to the 401 and a bus ride to Kipling or Islington subway stations. Nearby Kipling Collegiate was recently described by Macleans Magazine as one of the best high schools in the city. Also in the area is Kingsview Village Community School, Dixon Grove Junior Middle School, and Toronto French language public school, École élémentaire Félix-Leclerc. Parks in the area include Westway Park, Silver Creek Park and Kingsview Park.

Over the past two decades, the neighbourhood has attracted many new immigrant families, which gives it a diverse and stimulating character. Bustling local shops include specialty grocers with food selections from around the world. Health and community services are provided in many languages.

A cluster of apartment buildings surround one of the area’s green spaces, Dixon Park, which has been a neighbourhood focal point for many years. In 2003, MBA basketball great, Vince Carter, opened a basketball court here. Named by Now Magazine as the “best court in the city”, the court and accompanying Westway Centre forms a community hub. A second community centre at Kingsview Village Community School offers nightly programs for free, as well as free drop-in programs.

As one long-time resident wrote: “The community is vibrant, most people know each other and interact well, and quite frankly, everything is so nearby. … There's always something going on, and the community is so diverse that I learn something new every day.” 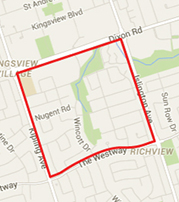